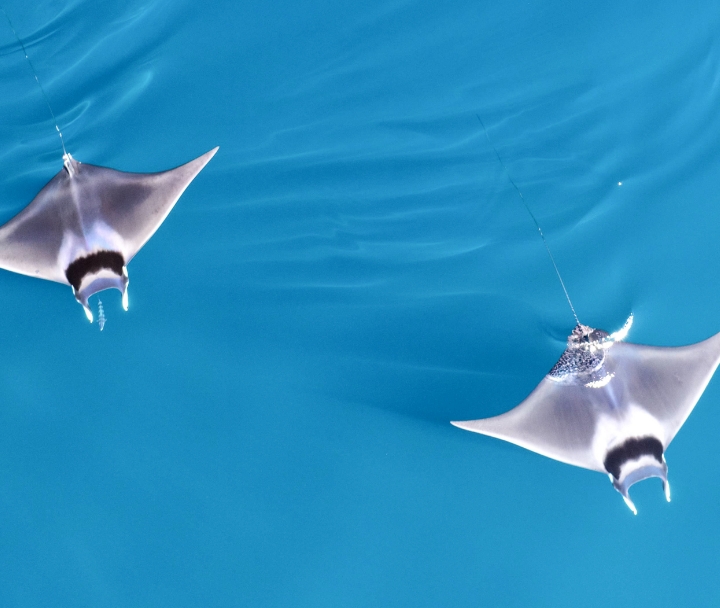 SPINETAIL DEVIL RAYS ARE ONE OF THE LARGER OF THE EIGHT SPECIES ON DEVIL RAY, WITH A MAXIMUM SIZE OF 3.2 METERS ACROSS AND WEIGHING UP TO 300KG.

Affectionately termed mini mantas, they share a lot of similarities with their larger oceanic manta cousins, including their worldwide distribution and very conservative life histories. Consequently, this has resulted in spinetail devil and oceanic manta rays also sharing the same IUCN conservation status of globally Endangered as many populations are now in decline. In fact, out of all mobulids (manta and devil rays), spinetail devil rays are the most commonly caught species in targeted and bycatch fisheries. 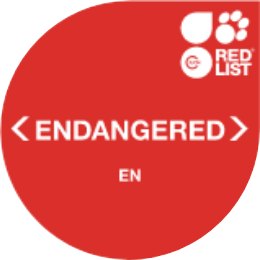 Little is known of the biology or behaviour of spinetail devil rays in New Zealand waters, as we don’t get to encounter them very often.

What we do know is that spinetail devils are more likely to be spotted during summer through to early autumn and closely associate with “blue water”.

These clear blue, offshore waters are warm, 22°c plus and usually sit off the upper North Islands east coast in water that exceed 200 meters depth. As offshore and inshore waters mix through the season, these blue water masses come closer inshore and so do the devil rays.

To the trained eye spinetail devil and oceanic manta rays look very different, however it’s easy to appreciate how a case of mistaken identity can occur. There is a significant size overlap between mature devil rays and smaller mantas that are in the 2.5 to 3.5 meters disc width or size class.

There are four key differences to look out for to make species identification between mantas and devils easier.

Spinetail devil rays are much lighter in dorsal (topside) colouration, ranging from light grey through to slate blue and in the right light their dorsal surface shimmers a beautiful iridescent purple.

Spinetails have a much narrower head shape compared to manta rays, which is emphasised by a thick black head band that stretches from eye to eye. Their cephalic fins are shorter and look like horns when rolled up, hence where the name devil comes from.

The underside or ventral surface of spinetail devil rays are completely white with no identification spots or additional colouration.

As the name suggests, this species has a spine at the base of their tail, below the dorsal fin that has a bright white tip.

Unknown, but likely
to be at least 15 years

Spinetail devil rays are primarily encountered in small groups and rarely seen alone. There are numerous reasons why devils would tend to stick together. Traveling and resting in groups likely has a lot of safety advantages such as avoiding attacks from open ocean predators like large sharks.

As with manta rays, when lots of food concentrates in a certain area, large aggregations of feeding spinetail devil rays can occur. Such mass feeding events have been reported off the Northland coast, whereby several hundred rays were observed feeding and breaching out of the water.

Another key behaviour involving multiple devil rays is courtship, this behaviour has been confirmed to be relatively common in New Zealand’s offshore waters. As with reef mantas and other devil ray species, active courtship involves several males in hot pursuit of a heavily pregnant female, which is known as a mating train. The female leads the train as the males jostle for prime position, the spot directly behind their prospective mate. It is assumed that the successful male will mate with the female soon after she has given birth, meaning it is commonly agreed that this population of spinetail devil rays are giving birth in NZ waters.