Manta and devil rays have extremely conservative life histories; they are slow growing, long lived and mature late. Pregnant females give birth to one pup after a mammoth 12.5 months.

This slow and steady approach to life makes manta and devils rays incredibly vulnerable to any form of exploitation, as it takes populations such a long time to replace the breeding adults lost.

THERE IS STILL SO MUCH ABOUT THESE ANIMALS WE DON’T KNOW OR ARE JUST BEGINNING TO UNDERSTAND, INCLUDING THE EXTENT TO WHICH HUMAN ACTIVITIES ARE NEGATIVELY IMPACTING THEM. 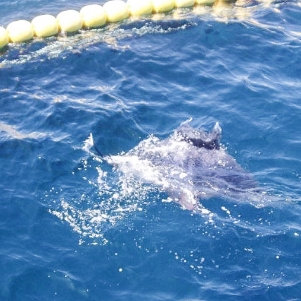 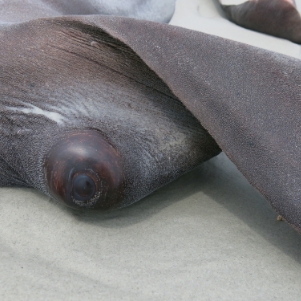 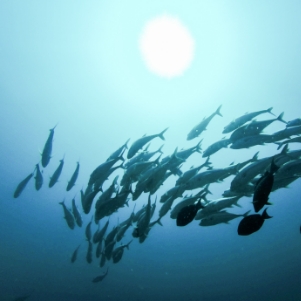 The most serious threat to manta and devil rays without doubt is human fishing activity. Targeted and bycatch fisheries are driving global population decline at such rates that many populations are becoming unstable and at increasing risk of extinction.

The primary driver behind this unsustainable fishing pressure is all to do with manta and devil ray gill plates. Gill plates are the fine, sieve-like structures that enable the rays to filter their zooplankton prey out of the water whilst feeding.

This relatively recent, highly profitable industry is being driven by medicinal markets with the biggest markets being in Hong Kong and China. Gill plates are marketed to have a range of health benefits including anti-inflammatory, blood circulation and purification properties when consumed. Scientists have yet to find any evidence to support these health claims which at best are considered a pseudo-remedy. Unfortunately, this highly exploitative health-based marketing has seen a steady rise in consumer demand further fuelled by the product’s high market value.

These boom and bust industries are highly damaging not only to the environment but also to the people that depend on them. Tireless conservation and education efforts have seen massive gains in restricting the international trade of gill plates. However, there is still much work to be done to increase protective legislation and help governments and communities to secure viable alternatives such as ecotourism and marine protected areas. Manta and devil rays are worth more alive then dead with manta ray tourism alone estimated to be worth $140 million US dollars annually. Collaboration, research and education are key to ensuring a sustainable future for the world’s oceans and ocean dependant communities.

Fisheries bycatch is when non-target species are unintentionally caught in the process of fishing for another species. Depending on the fishery and fishing method used, the amount of bycatch and the number of species impacted is highly variable. Over the last decade there has been a lot of education and awareness around “cleaner” more selective fishing methods that we as consumers can support. The more selective a fishing method, the less impact it has on other marine species and the surrounding environment. For example, spearfishing is recognised as the most selective method of catching fish whereas bottom trawling is the most destructive and non-selective.

Bycatch is a global issue that negatively impacts manta and devil rays as well as sea birds, marine mammals, reptiles, invertebrates and innumerable other fish species. Oceanic manta rays and large devil rays such as spinetails are especially vulnerable to offshore and high seas fisheries. Drift nets and gill nets are particularly treacherous as rays can’t swim backwards and easily get caught in these expansive, open-faced nets. Tuna purse seine fisheries are also of concern for manta and devil rays. These fisheries target whole schools of fish feeding at the surface and are the most common way to catch skip-jack tuna in New Zealand. Along with manta and devil rays, skip-jack tuna love to feed on swarming krill in the summer months which often results in fishing activity overlapping with key mobulid ray feeding areas.

Purse seine fisheries work by deploying a net around the outside as well as underneath the tuna school. Ropes connecting the edges of this large net are then tightened, (much like a purse string), retaining the majority of the school and whatever other species are feeding with the tuna at the time. Spinetail devil rays being much smaller than mantas, often escape early detection in large schools of feeding skip jack tuna and are accidentally caught as bycatch in the NZ purse seine fishery. When caught, both manta and devil ray survival rates dramatically improve if they can be removed from the purse seine net before it is taken out of the water.

Much work has been focused on providing commercial fishing fleets with mitigation tools to reduce ray catches as well as handling best practices in the event rays have to be brought on board. That said, there is still a lot of research needed in order to better understand how, when and where Aotearoa’s mobulids use their environment. This knowledge will enable the potential threats from fishing activity to be properly identified and managed throughout the population ranges of both ray species.

Discarded and lost equipment from commercial and recreational fishing activity continue to fish and entangle marine species long after the nets have left the fishing boat. Ghost nets i.e. discarded or lost fishing gear can entangle manta and devil rays, particularly as they can only swim forwards.

Fishing lines with or without hooks can also get wrapped around a manta’s wing, head or cephalic fins, resulting in cuts, nerve damage, limb loss and death. Stationary, man-made structures such as mooring lines or fish pot buoy lines have also been known to trap manta and devil rays.

In areas where there is a high density of rays, mitigation methods have been implemented to reduce the risk of entanglement. Strategies include making mooring lines more visible so that manta rays can actively avoid them, as well as removing or relocating structures to more low risk areas.

Manta and devils rays love to bask in the sun just below the ocean’s surface. It is believed that the rays use these warmer surface waters to rest, aid food digestion and help pregnant females go into labour. Unfortunately, these stealthy animals are notoriously hard to spot even when you are looking for them. The global increase in motorised boats and boat traffic generally, has inevitably led to an increase in boat and boat propeller strikes on manta rays. Locations where manta tourism takes place are particularly risky and speed restrictions have proved effective in manta hot spots such as feeding areas. Education and awareness promoting safe boating speeds in high risk areas are key to ensuring mantas and devils can bask in peace.

Our oceans cover 70% of the earth’s surface and play a fundamental role in absorbing and redistributing heat and carbon dioxide (CO 2). Unfortunately, our big blue buffer has a limit to how much CO 2 can be soaked up without negatively impacting its marine life. As our oceans warm and continue to load up on CO 2, there ability to hold oxygen lessens and they are becoming increasingly more acidic.

If warming continues as projected, we will soon see ocean-wide disruption to temperature and nutriment regulating currents that underpin all oceanic processes. This will ultimately impact the ocean’s productivity, resulting in a decline in phytoplankton (microscopic plants) and the zooplankton (microscopic animals) that many species feed on. For manta and devil rays and innumerable other species this will likely result in food security issues. As zooplankton abundance decreases, historically productive foraging areas, or hot spots, could change location or even disappear.

Our warming oceans are already showing signs of stress in the tropics where mass coral bleaching events are becoming more regular. Coral reefs are the foundation of most tropical marine ecosystems, providing vital habitat and food to thousands of species. Specific areas of coral reef also play an important role as cleaning stations for larger marine animals including manta rays. Manta rays are known to visit cleaning stations on a regular basis where small hungry reef fish await to rid them of unwanted parasites. Cleaning stations also act as social hang outs for mantas, enabling them to relax and catch up with each other as they enjoy their spa treatments.

Along with bleaching events which are caused by short, sharp hikes in temperature, the ocean’s steady increase in acidity is beginning to threaten the very structure of coral reefs. Coral’s hard skeleton is made of calcium carbonate, which has little tolerance to acidic conditions. As ocean acidity continues, the growth and structural integrity of coral reefs are likely to be compromised. Some coral species may even begin to dissolve. For subtropical and temperate marine ecosystems where kelp forests take the place of corals, warming oceans will likely see a shift in kelp species.

Currently many cooler water species are in stress and dying off in areas where marine heat waves and rising water temperatures are most prevalent. As kelp forests decline the species that depend on them are displaced. This imbalance then spreads throughout the entire ecosystem.

It’s easy to feel overwhelmed by what’s happening in our oceans and how these changes impact not only manta rays but all marine species. However, we believe by sharing this knowledge everyone can focus on the next step: our future and what we all can do to make a difference.

Our natural world is incredibly resilient but she’s struggling and needs our help. We all have the power to make little changes that add up to big conservation gains. Whether it be learning more about how your fish are caught, the products you buy, changing how you travel to work or the operators you choose to support whilst on holiday, we can all make a difference.

By making informed decisions we can all do our part to slow down and even reverse the many threats impacting our oceans. It’s an incredibly positive time with countless possibilities, but we do all need to embrace positive change and give our natural world the love and care she deserves.